I have a list of things I had always wanted to wear and on top of the list is a jumpsuit (next being a kilt). The problem is the jumpsuit look is very hard look to pull off and in some instances, the risk of looking like a mechanic in overalls is very high. I thought that I could get away with a short version for summer but as I was on a holiday last month, the idea was shelved.

When I came back from my holiday recently, I saw a colleague of mine wearing this amazing dress where the back was one piece and the front was two pieces (a top and a skirt). I thought what a wonderful idea that was so I reimagined this concept with a jumpsuit version by having a jumpsuit piece at the back but a two piece (shirt + shorts) version at the front.

I thought the best way to approach this pattern was not to draw one from scratch but to combine my shirt and shorts pattern . There was a lot of hesitation at first as I tried to amend and combine these two patterns. My worst nightmare was to cut the back piece too short thus causing a ‘wedgie’ everytime I bent down or cut it too long that the excess would bunch up at the back. Solution? I put the tape measure on my nape, bent over and measured along the center back where the crotch of the shorts would be. It seems that this technique worked as my nightmare was not realised.

The next step was to figure out how to hold the back piece up (especially around the waist) and not let it sag down. After having a look at several type of jumpsuits on the internet, I came to the conclusion that I need to insert an elastic band that would grip onto my waist.

In the front, the shorts acted in the same way you would find a normal short and this was also similar for the shirt. The only difference was that the two bits (shirt and shorts) were sewn together at the side seams. This meant that the shirt will always be permanently tucked in. 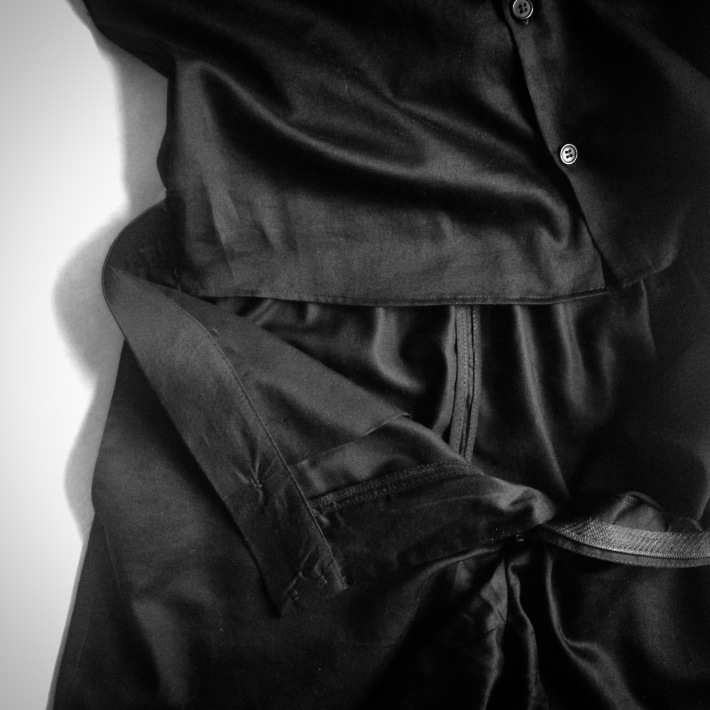 This outfit went for a dry run on Friday and the fit was very good. The only change I had to make was the tension of the elastic band. I had to make it slightly tighter so it actually held the front waistband instead of allowing it to sag.

I wore this (together with my Teva sandals) to the London Collection: Menswear show and it was so comfortable that I am making a couple more versions but this time in vivid print! I may also experiment with different cuts to the shirt pattern as well as the shorts.

Maybe this year I will go all out in a jumpsuit. After all, summer is here and I need to update my wardrobe.