With a holiday looming, I dug out all my Euro coins and realised that I have amassed quite a hoard! I knew they would come in handy on my holiday but the thought of them jingling in my pocket was so off-putting! I then realised that on my recent trip back to Malaysia, I bought a purse making kit and had wanted to try making one for quite a while now.

As it was something I am probably going to be using for a long time, I decided it should not only be useful but look good as well. Cue the crocodile skin stored away in the crevices of my room. In case if you were wondering if I had a pet crocodile that just died, the leather was previously a very old but badly damaged handbag that was destined for the bin until I was asked if I wanted to make something out of it! Who can resist such an opportunity to ‘upcycle’ something wonderful like that!

Being a small purse, I only need a small amount of leather. I also decided that I was going to use some left over scraps of Liberty fabric I had. 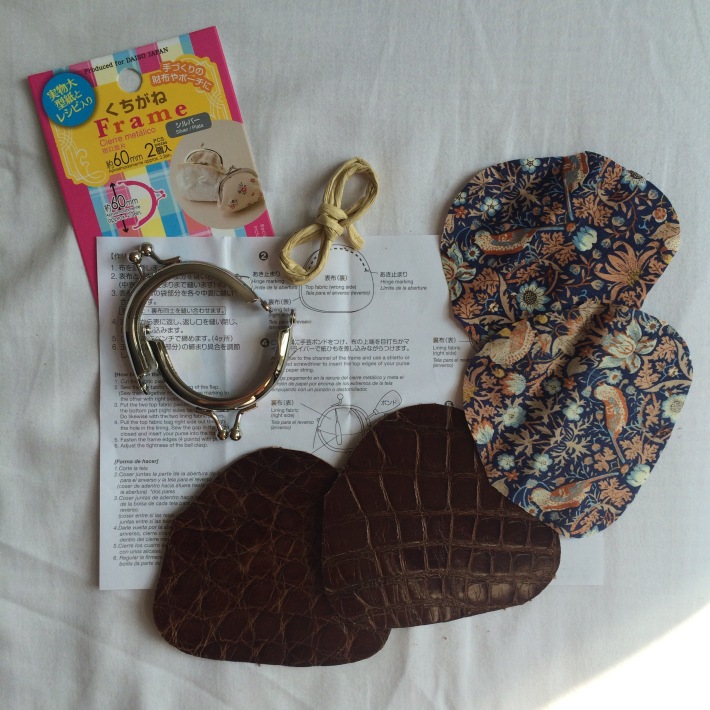 With all the pieces cut out and me sitting in front of the sewing machine, I hit a snag. The instructions provided were vague and confusing. I felt like I was on some technical challenge on the Great British Bake-Off. Eventually after reading the instruction time and time again, I kinda guessed my way around the process and completed the purse.

I have to admit that a fair amount of swearing went into making this purse as getting the metal clasp bit to attach to the leather was cumbersome and the wrong pliers made it worse. But for my first try, I was pretty impressed and for a cheap kit, I see a lot of potential. Even the inside looks nice.

I find this a very nifty kit to make presents for Christmas. Maybe even as a stocking filler? And with chocolate coins inside?