A Lesson On Failure.

Failure seems to be something that is frowned upon and treated as an embarrassment and as something that sets you back for life. But there is another philosophy in thinking that failure actually enables growth and change. Failure is also part and parcel of experimentation and the results informs on future successes. This project is a prime example of failure and an establishment of successful techniques that resulted from it.

I don’t have a penchant for jewellery, especially rings but occasionally, I would wear something I really like. I had always wanted a signet ring but those rings are either too big for me or looks very traditional. I would also like a beautiful jewel on it but budget wise, I can only afford a coal. What I decided was to make my own using silver metal clay and experiment with glass enamelling.

My usual method of making a ring involve taking a cap of a tube of sample size hand lotion and coiling a rolled strip of metal clay on. Although this technique is effective, the results are often rudimentary. This time, I wanted to create something more sculptural and had been eyeing on a cushion style signet ring. I knew that the only way to do this was to build the cushion shape and stick it on the lotion cap before coiling the shape around the form. When the clay was dry, I carefully removed the ring but it disintegrated before my eyes. Some of the bits were stuck to the cap and I did not roll the clay thick enough to withstand the force of me prising the clay off the cap.

The ring went into the kiln and I held my breath as I peered into the viewing window to see if everything was still in one pice. At the end of the sintering process, I removed the now solid ring and was very happy with the outcome. 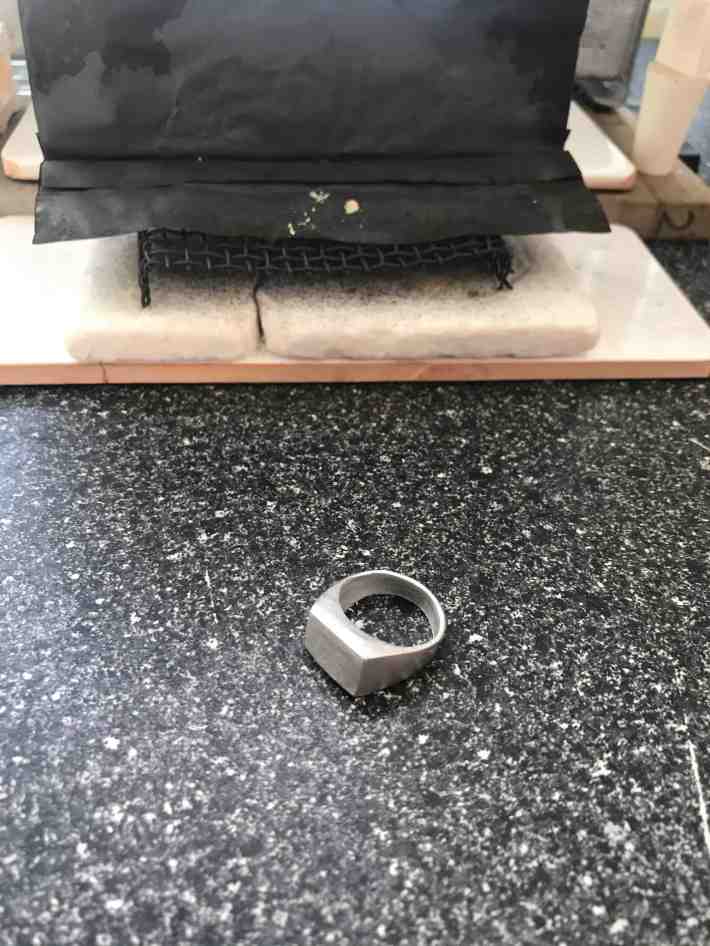 The next step was the glass enamelling. Initially I wanted to create a very basic ‘Archibald Knox’ style enamelling where the glass looked like a blend of watercolours. This was how I started.

On my previous attempt, I used a blow torch to melt the glass but I must not have put enough adhesive compound as the glass powder all rolled into a ball when it melted instead of a smooth surface. I decided to go back to my old method of using the kiln on my second attempt. When I took it out, I didn’t really like how the colours melded together so I applied a bit more glass powder and used the blow torch again. And of course, the glass powder rolled up into a ball again but this time it was stuck permanently on the surface of the enamelling. Some of the colours also changed when I blow torched it. Anyway, not waiting to give up, I put it back in the kiln and the glass melted into a smooth surface. When I took it out this time, the enamelling looked like marbling.

What a happy accident. I never knew that using both the kiln and blow torch could result in this effect. The only thing I needed to do was remember how I achieved this result and hope that I can replicate it in the future.

When the enamelling was done, I burnished the silver and gave it a silver hallmark. Although technically the silver is 95% pure, anything less than 95.8% should be hallmarked as 925, i.e. Sterling silver and anything about 95.8% as Britannia Silver.

One thing that I need to remember for any future ring projects is to find a bigger cap as the one I have will only fit my ring finger. The silver clay shrinks about 12% so the original form before firing fits on my index finger.

I guess that’s the great thing about experimentations. I didn’t go to school to study jewellery making and my only lessons was watching my dad solder pieces of gold together (he was also self taught) and watching craftsman making gold jewellery when my dad visited them. As with enamelling methods, I had to improvise from the basic instructions found on the internet. However, this meant that I’m not influenced by any particular advice and thus am allowed to fail or as I would say, experiment.

This makes me wonder if creativity can be taught? Essentially you are taught the teacher’s way of approaching a problem but the same answer can arise from different methods. I guess the best schooling is when everyone learns for everybody as this symbiotic way of ensures that there is continual progression for both teacher and student. After all, we should also learn from other people’s mistakes.