During my pottery course, I was inducted on the throwing wheel. I had always wanted to try throwing as it seemed like a very technical skill. Initially I thought throwing was very simple but when the techniques were explained to us, it dawned on me that skills and concentration were very important.

I was given 5 lumps of clay and in excitement, I immediately jumped on the wheel. I followed through with the instructions but that’s where I got stuck. I found that I had a hard time centring the clay. It kept wobbling and the more water I added to it, the slicker it became. Eventually my tutor came over and told me that I must whisper to it to keep still. That, with an amount of tensing in my body to stop the wobbling. He showed me how and it immediately went still. From there, pinching the clay was really simple and I found it easy to create the form.

Then came my second try and I encountered the same problem. I could not get the clay to centre properly and eventually I added so much water the whole lump of clay slipped off the wheel. I tried again with no. 3 and this time I kind of got it to centre and thus another form was created. Then I failed on no. 4 before succeeding again in no. 5. What a complicated process this was. 3 out of 5 was good but then all three forms looked different. They were supposed to be pots but ended up being bowls. 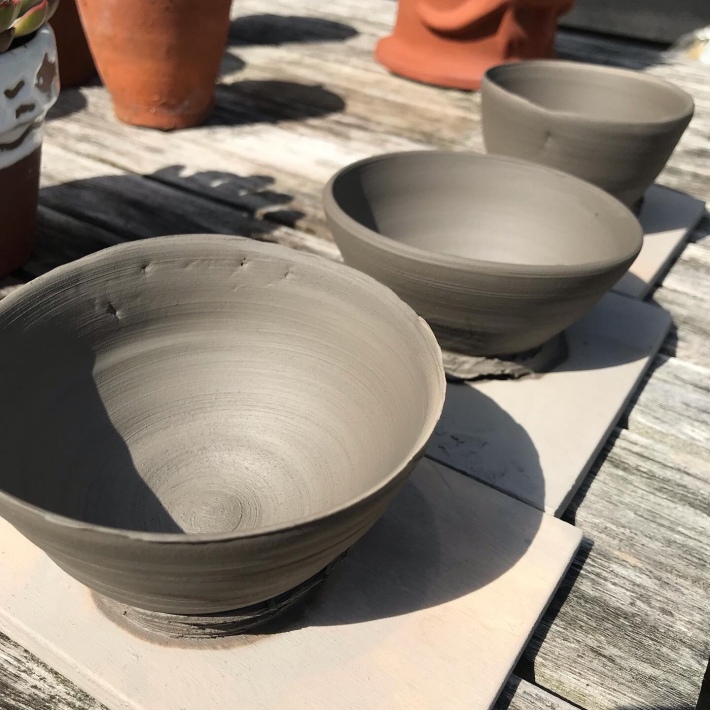 However, I was hooked on throwing. I was tempted to try it again but I wanted to ensure that these bowls were properly finished and smooth for firing. I did have a favourite bowl so I guess, my first try on throwing went quite well, even though they were supposed to be pots.

With everything completed, I left the bowls with the tutor and it wasn’t until a few months after that I went back to have it glazed.

Glazing threw up a whole new world of possibilities, in terms of colours and texture. It was like being in a candy shop as you had a wealth of colour to choose from and mix with. After dithering for what seemed like a very long time, I decided on a colour my tutor had created called ‘peat’. It had a greenish metallic finish and made the pottery looks antiquated.

Glazing for the first time was a very nerve wracking experience. I wanted to make sure that everything was right as I didn’t want to ruin the bowls that I had made. I also had to ensure that I had the correct glaze as all glazes looked exactly the same. Eventually, everything was dipped and cleaned before it went into the kiln. This was the result.

To be perfectly honest, I was ecstatic and proud of the results. It had exceeding all my expectations and when I looked at the finished product, it was difficult to believe that I has actually made it with my own hands. I can relate to other potters who experienced the same pride in their work and were now resolute in creating a dining set. Although I’m still way off from that goal, I can’t wait to get back to the pottery wheel again. The mesmerising wheel takes all your worries away and I now understand when people talk about the Zen in throwing.

Recently, I drank Chinese tea from one of the bowls I made and it was the most delicious tea I had ever tasted.