So I came, saw and conquered. Instead of being a conquest, I saw a discarded piece of leather as I was walking past the bin at work and immediately saved it from the landfill. What a waste to throw away a perfectly good piece of leather. After all, an animal died for this!

If you know me, I hate waste, especially textile waste. Unfortunately, this is quite prevalent in education especially when complex patterns requires yardage to experiment, toile and toile again! The end product is usually kept and hung up like a work of art but the other failed toiles are discarded without a thought. I understand that scraps are now recycled but until I see the process from bin to the end product, I am not convinced!

Anyway, this piece of leather had a magnificent bronze metallic sheen and being the magpie that I am, my eyes immediately zoomed on it and within seconds, it was in my hands being spirited away to the safe comfort of the studio.

I wasn’t sure what to make at first as it wasn’t a large piece of fabric. I would have loved a backpack but realistically, a tote bag was more suitable for the size. My colleague then commented that instead of making a normal tote (i.e. a flat tote bag) I should add panelling to ensure that I have more space to put my stuff. I agreed with her suggestion and with a rotary cutter in one hand and a ruler in the other, I quickly cut out the pieces while analysing how I was going to put it together.

I set the machine up and decided to use the industrial sewing machine at work as it responded better compared to my domestic. Sewing leather on an industrial is so much easier and in a space of an hour, this tote bag was done.

Initially, I wasn’t too sure about the colour but after the bag was made, the androgynous shape convinced me.

While sewing this bag, the panels on the side were longer than the height of the bag. Initially I was going to cut them off but decided not to as it served as flaps to cover the bag when I have my stuff in it.

I also sewed in a pouch for my keys (I hate rummaging around at the bottom of my bag for the keys). 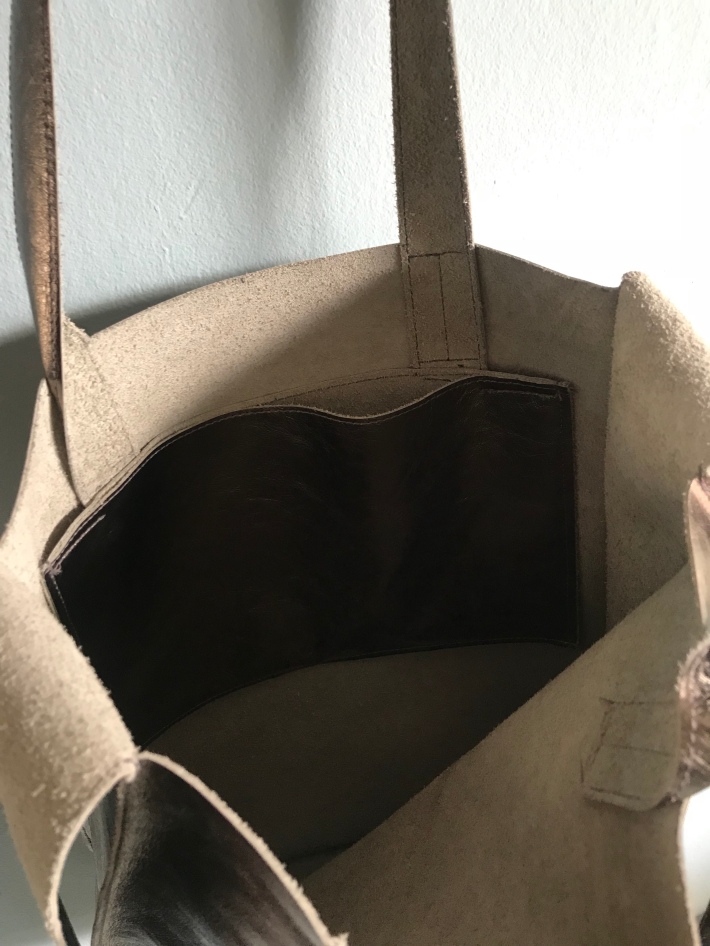 I dreaded sewing the corners of the bag but somehow, it turned out well.

I do have to say that having a proper sewing machine with all the correct accessories and thread helped immensely. If I was doing this at home, I probably would have spent the majority of the time unpicking the stitches that had gone wrong and wrestling with the sewing machine.

I’m glad I made this bag as I had always wanted a leather tote bag in this specific shape. The flat tote bag won’t fit my lunch box and water bottle properly and this is the reason why I would use a backpack instead. Now I can happily fit everything in this shiny, new tote bag of mine.

(P.S. Just so you know, the scraps were turned into two coin purses which I gave away. Eventually, only slivers were thrown away!)